If a kaiju appeared in a city, I bet it’d make you more likely to visit it. Any self-respecting kaiju fan probably would.

Well, that’s what the cities of Kita-Kyushu and Shimonoseki in the Yamaguchi Prefecture have been doing for several months. To promote tourism to their cities, they released an online video featuring a kaiju emerging from the Kanmon Straits, which separates the islands of Honshu and Kyushu. Here’s the video:

The bizarre creature is composed of local specialties found in nearby waters, like pufferfish and octopuses, and is supposed to be a reincarnation of the Heikegami, a Japanese crab, which is said to be possessed by the fallen warriors of the Heike clan defeated at the Battle of Dan-no-ura in 1185. (This sounds easily similar to Godzilla’s origin in GMK, doesn’t it?) In other words, it’s packed full of local flavor. (Personally, in distant shots, I think the creature almost looks to have an unmasked Predator face).

The video was originally done in English so as to draw international attention, but it was also subtitled into several other languages.

The creature is humorously defeated by the water current because the Kanmon Straits have one of the fastest tides in the world, with speeds up to 10 knots (about 12 mph). Not only that, but the special effects team that worked on Toho’s latest Godzilla film, Shin Godzilla, created the effects in this promotional short.

While this technically isn’t Godzilla, it’s certainly a byproduct of the longstanding kaiju tradition started by the original 1954 film Gojira. So, these cities are vicariously tapping into Godzilla to promote tourism. It’s also an expression of Japan’s “gross national cool” (or “Cool Japan”). This was a term coined by Douglas McGray in Foreign Policy magazine in 2002. As Japan’s pop culture—J-pop, manga, anime, etc.—has infiltrated other nations and exploded in popularity, it has created an appealing image for its native country while also being quite profitable. The Japanese government has sought to use this “soft power” (indirect influence through cultural or ideological means) for economic growth. To bring it back to the kaiju video, the fact that this short was intended to be seen internationally shows how prominent and widespread the kaiju culture is and how closely it’s tied to “Cool Japan.” In other words, it’s an international cultural touchstone. Godzilla and kaiju still remain relevant.

You can learn more about the short film here.

The driftwood sculpture of Godzilla on a Japanese beach. (Photo source: Asahi Shimbun)

Did you know Godzilla raised awareness about beach beautification in Japan?

Well, a driftwood sculpture of him did.

Last month, a social worker named Yoichi Shigeyama erected the 16-foot sculpture of the King of the Monsters on Nijigahama Kaigan beach in Hikari, Japan, to raise awareness about the aforementioned issue.  He collected the driftwood and bound them together with hemp cords.  The artwork stood for nearly a month before local officials told him to take it down for fear of high winds blowing “Wood-zilla” down and injuring some of the many visitors who’ve been coming to see it.

So, on June 1, Shigeyama spent several hours taking the sculpture down.  However, he did create footprints that led from where it stood to the ocean.

“Godzilla has returned to the sea, leaving its footprints,” Shigeyama was quoted as saying.  “I will never make another driftwood artwork on this beach, but I feel happy if it could raise awareness among many people about beach beautification.”

This story is yet another example of how prominent and significant Godzilla remains in Japanese pop culture.  While he was first created to tackle a heavy issue—nuclear proliferation—he hasn’t been limited to that.  Over the decades, he’s been used by filmmakers to talk about themes such as nationalism, environmentalism, and bullying, among others.  Now he’s raising awareness about something as simple as beautifying beaches.

Brian and I created Kaijuvision Radio because we believe there’s far more to Godzilla than a simple B-movie monster.  We hope this story helps to illustrate this idea.  You can expect even more stuff like this in our upcoming episodes.  If you’re not a Godzilla fan, we hope your eyes are opened to new possibilities.  If you’re already a G-fan and kaiju lover, we hope our podcast gives you an even greater appreciation of—as Steve Ryfle said—“Japan’s favorite mon-star.”

Speaking of which, if you haven’t heard the trailer for our show, listen to it here.

Brian and I will be attending G-Fest XXIV July 14-16 in Rosemont, Illinois at the Crowne Plaza Hotel O’Hare Chicago.  We won’t be in the dealers’ hall, though.  We’re technically going as regular ol’ attendees, but we’ll be talking up the podcast and getting to know everyone.  We’re not sure if we’ll have episodes posted by then, but we’re hoping to meet future listeners while we’re there.

What’s G-Fest? Well, as the convention’s website puts it:

G-FEST is the largest regular gathering of Godzilla and Japanese monster fans in the world.  Held each summer, it typically attracts more than 1,000 attendees, but has seen a gradual increase in attendance over the past few years.  G-FEST 2014 was the most successful convention to date, bringing in about 3,000 Japanese science fiction and fantasy film fans!

In other words, it’s a “comic-con” that’s strictly for kaiju fans.

Along with the many panels and events going on that weekend, there will special screenings of six kaiju films at the nearby Pickwick Theatre, though most of those will be July 13, the day before the convention kicks off. Watch the trailer below to see what films will be playing.

It’s safe to say that Brian and I will be taking as many opportunities to see these films in a theater since most of these we haven’t experienced that way.  Feel free to hit us up before, after, or between screenings!

I’ve been a regular con-goer for a five years now, but this will be Brian’s first time at such an event and the first time either of us have attended G-Fest, so we’re excited.

You can learn more about the convention on its website here.

See you there, G-Fans and kaiju lovers!

As mentioned in a previous blog, Brian and I reside in Indiana. More specifically, Kaijuvision Radio is based out of Fort Wayne, the second-largest city in the state. Something about it that’s relevant to this podcast is Fort Wayne has a sister city in Japan: Takaoka, which is located in the Toyama Prefecture on Honshu.

Takaoka was the first of Fort Wayne’s four sister cities. Officials from both cities signed the agreement to become sister cities in 1977. Since then, the cities have enhanced each other in many ways. According to the Fort Wayne Sister Cities International website:

This sister alliance has led to many exchanges of government officials, teachers, students,  artists, and private citizens.  Significant developments have been the Takaoka Koshimae Scholarship Fund, endowed by a prominent citizen of Takaoka, and the Fort Wayne Chapman Exchange Fund, endowed by a charter member of Fort Wayne Sister Cities International.

(Carroll High School, by the way, is my mother’s alma mater).

Takaoka has several noteworthy attractions, including the Great Buddha of Takaoka, which is 53-feet tall, making it the third largest Buddha statue in Japan; the Zuiryū-ji Temple, a Zen temple built in 1663 and is now designated as a national treasure of Japan; and Kanayamachi, an area of the city that features traditional buildings dating back to the Meiji Era. 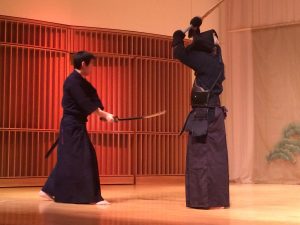 A local master demonstrates kendo with one of his students at the 2016 Cherry Blossom Festival in Fort Wayne. (Photo by Nathan Marchand)

Because of the relationship between Fort Wayne and Takaoka, the Allen County Public Library has hosted an annual event for over a decade called the Cherry Blossom Festival. In many ways, it’s like a one-day comic-con, except focused on Japanese culture. I attended it last year but was unable to do so this year because of other commitments. When I went, I was able to attend events showcasing kendo, katanas, taiko drumming, and haiku. There were vendors selling manga (Japanese comic books), kimonos, and artwork, among other things. It was great fun.

There are other connections as well. There’s a restaurant in downtown Fort Wayne called Takaoka of Japan. Fort Wayne Sister Cities International publishes a newsletter called Kawara-Ban about the Japanese community in the city. Cherry blossom trees have been planted across the city.

Was Takaoka ever featured in a Godzilla/kaiju film? As far as we can tell, no. However, since Japanese culture is a major focus of Kaijuvision Radio, and this has local significance for Brian and I, it was something we thought was important to mention here. It’s a local sign of Japan’s “gross national cool,” which is how most Americans know that country. We don’t have to go far to experience Japanese culture, and I’m sure the same is true of you, G-fans and kaiju lovers.

So, once we start dropping episodes on your favorite podcatcher, go for a walk at a local Japanese-themed attraction while you listen to us.

You can learn more about Takaoka here.